It is difficult to miss the Sunsphere as you pass through Knoxville. Throughout the years, this structure has become synonymous with the city. Even though it may not be the tallest building in the city, its golden aura stands out in a city not all that uncommon architecturally speaking. The Sunsphere rises 266 feet into the sky, a long lasting testament to the fair’s theme, “Energy Turns the World.”

On a bright spring day in 1982, President Ronald Reagan stood at a podium in the shadow of the Sunsphere to welcome the world to East Tennessee. The 1982 World’s Fair opened on May 1st and ran through October 31st of that year. When all was said and done eleven-million visitors had passed through the brightly colored gates sending Knoxville into a new era.

Following the fair, much of the grounds that were once packed with people faded from glory. The temporary pavilions, corporate exhibits, and the giant Ferris Wheel were quickly dismantled. Several years later, the largest structure built for the fair, the US Pavilion, was razed after numerous attempts to breathe new life into it failed. The Sunsphere remains the most visible reminder of the time this “scruffy little city” hosted the world.  It is also a place to get a great view of the city and the Great Smoky Mountains.

The trip up to the observation deck on the 4th floor is an easy one, and best of all, it’s FREE. Just hop on the elevator at the base of the structure and enjoy the ride. Once you get to the observation deck, you are in for a real treat. The view of World’s Fair Park and the surrounding city gets a special glow as you look out the “golden” windows. Even the Great Smoky Mountains in the distance seem a bit more special when you gaze at them from this distance.  Miss USA 1982, got a view from the very top as she opened the 1983 Miss USA pageant  held just a few blocks away.

The Sunsphere is at the center of a sprawling park, with Downtown Knoxville on one side and the University of Tennessee on the other.  It is filled with fountains, a small lake, the Tennessee Amphitheater (another surviving structure from the 1982 World’s Fair), a veterans’ memorial, a children’s playground and the Knoxville Museum of Art.  Another treasure hidden away in this park is a statue of the famous Russian composer, Sergei Rachmaninoff who gave his last concert in Knoxville in 1943.

The Sunsphere’s neighbors include the Knoxville Convention Center, the Tennessean Luxury Hotel, and the UT Conference Center. Just a few blocks away you’ll find Gay Street and Market Square, a bustling downtown district filled with restaurants, stores, night clubs and lots of history. But if you're a Simpsons fan, don't expect to find any wig shops in World's Fair Park. 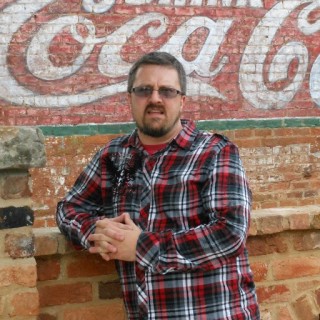 My name is Clayton Hensley (a.k.a. the knoxdaytripper). Born and raised in East Tennessee (with a few years in SW Virginia), I have been traveling the backroads and hiking in the mountains for as long as I can remember. Through my writing and photography, I hope to inspire people to experience places they might not have heard about before or look at familiar places in a new light.

For more than 20-years now, my wife and I have called Clinton, TN home. We have two children who (for the most part) love to travel with us. My “real” job is working as a communications director for a large church and in what little spare time I have, I like to garden, take lots of pictures, collect Coca-Cola stuff and catch up on all those shows I miss because I’m always doing something else.